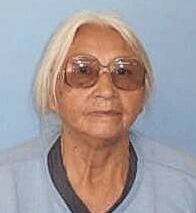 Emily OSMOND (LAPLANTE) lived a reclusive lifestyle on a small acreage on the Northern edge of Kawacatoose First Nation. OSMOND seldom had contact with her family or friends and the last known contact with them was 29th of August, 2007. She was last seen on the 13th of September, 2007, by her hired helper. Her disappearance is very unusual. Her vehicle and personal belongings including medication were left at her residence. She also had dogs at her acreage that she cared for that were left unattended. Searches of the area have failed to locate any sign of Emily OSMOND.

Walks with a cane.


If you have any information regarding the disappearance of Emily OSMOND please contact one of the following agencies: